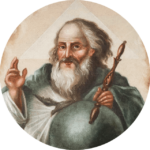 How the Painting of God the Father
found its way to the Chapel of the Sisters,
the Servants of Jesus, in Kielce.

At the beginning of World War II, Mr. Anastazy Rogowski fled from Wareza, Province of Lvov and arrived in Kielce. Here, he had distant family members. Among them was Fr. Stanislaus Kurdybanowski, who provided accommodation for him in the house of the Catholic Association of Seryants of St. Zyta in Kielce, at 45 Wesoła St. This house was run by Sisters of the Servants of Jesus. Mr. Anastazy lived in this house until he died. While in Kielce he had written down the history of this painting. The authenticity of his story was confirmed by two priests working in the Curia of the Diocese of Kielce. One copy is with the painting. The second one is in the Archives of the Diocese of Kielce. Before his death, Mr. Anastazy Rogowski donated this painting to the Congregation of the Sisters of the Servants of Jesus. He died on 6th of July, 1960 and was buried in the Old Cemetery in Kielce. The painting, known from the many favours granted by God to those who prayed before it, was placed in the chapel of the Congregation of the Sisters of the Servants of Jesus, who ran an Institution of Education and an Infirmary for terminally ill patients in their old house known as ,,Zytek”.

This website uses cookies to improve your experience while you navigate through the website. Out of these, the cookies that are categorized as necessary are stored on your browser as they are essential for the working of basic functionalities of the website. We also use third-party cookies that help us analyze and understand how you use this website. These cookies will be stored in your browser only with your consent. You also have the option to opt-out of these cookies. But opting out of some of these cookies may affect your browsing experience.
SAVE & ACCEPT